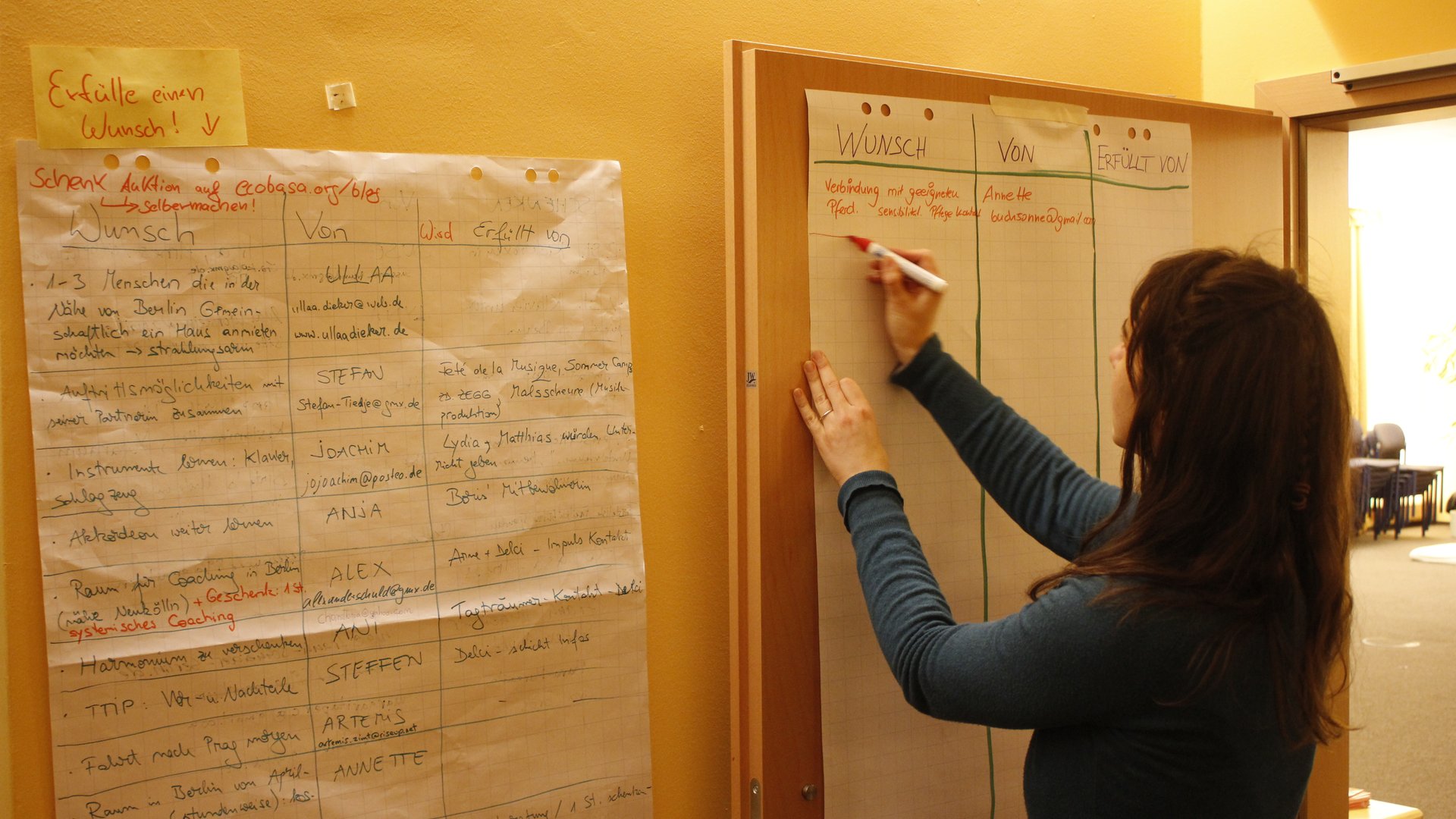 Last weekend, the ecovillage ZEGG was inviting to meet people of the city in Berlin.
As their community is located quite closely to Berlin this makes sense in many ways.

We thought that this might be the perfect occasion to bond them even stronger with the city and we offered to host a gift-economy auction on their event to pair up wishes from people with offers.
That way strong relationships are build and perhaps they could also benefit from beeing so close to a huge city like Berlin with many ressources and talented people.
Among our activities we where suprised to see a really good structured programm for the day in a really nice organic-spiritual hotel close to the river. There was a lot of space for people to present their projects and find like minded people.
The whole second half of the day was open-space and they ZEGG people hosted many workshops about encounter, connection and intimacy.
I did many tantra and community building workshops since some years, but i never felt that close, so quick to so many strangers.
In the evening there was a dance program and it was really nice to get silly and even more expressive and outgoing with the connections made during the day.

The gift-auction was very welcomed by many people and in general the idea of our project resonated a lot with many people present that day. We should have filmed every person that approached us and shared nice stories about gifts they received and community experiences and visions related to gift-economy. It was really inspiring!
A week later, I was getting a phone call from a participant who wanted to have a contact to make a gift to someone and we had a really nice, deep personal talk on the phone.

I was carrying such a warm feeling in my heart from that day and all the encounters with these nice open people, that i could share it with other people, too. I was part of a not so easy group process among some members of our team who where involved in a community-building project in Berlin that ended in conflicts. As they wanted to clear the space, some conflicts came up and even though i was also a bit involved i could stay connected to that feeling of closeness and, well..connection. I was sharing it after to the main conflict carrier on the Tempelhofer Feld and he told me, that he could really resonate and feel the feeling from my narration of that day. So many gifts for everyone and a good connection to ZEGG.

As we are mainly operating from Berlin it makes sense to strengthen and grow the local gift-economy community network. We are in contact with many communities in and around Berlin, but the connections are not so concrete, yet and not so many, so it is a good field to work on :) If you want to grow the gift-economy network with us around Berlin or anywhere in the world, just contact us!

See you soon!
Arne and Delci